The child separation policy now in effect (2018) for those families who, for whatever reason, entered the United States illegally, has an interesting precedent.

Not exactly surprising, since President 45 seems curiously enamored with Putin’s Russia. Vladimir Putin’s path to power started on the bottom rung of the promotion track of the old Soviet KGB, renamed the FSB, but retaining most features of its predecessor as well as its first incarnation, the NKVD under first Lenin, then Stalin/Beria.

The text of official orders of the NKVD regarding children of “class enemy” prisoners, some 18 million of which either died in “concentration camps” known as Gulags, or were released eventually to miserable settlements in Mongolia and Siberia which they were forbidden to leave on penalty of death, are quoted below.

The novel and film: “Dr. Zhivago” was based on experiences of those caught up in the coils of the Soviet system, and featured a young mother losing her child when attracting the attention of the NKVD.

First, they were almost all arrested for the alleged crimes of their husbands or fathers. Communist officials saw women as just another means of punishing men, rather than as individuals with distinct identities. One of the few ways for a woman to avoid arrest alongside her husband was, perversely, to accuse him of treason before anyone else did.

Signed by the head of the NKVD on August 14, 1937, Operational Order of the Secret Police No. 00486, “About the Repression of Wives of Traitors of the Motherland and the Placement of Their Children,” stated:

Women married to husbands at the time of their arrest are to be arrested with the exception of … wives who provide information that leads to their husband’s arrest… The wives of traitors are to be imprisoned… no less than five to eight years. Children… are to be placed in orphanages of the ministry of health in other locations.

That brings us to the second horror unique to women’s persecution. Upon a mother’s arrest, the Soviet system declared her children orphans and sent them as far away as possible. After regaining freedom a woman would often never learn of their fate. In the state-run orphanages, children of traitors and class enemies faced social stigma. They were taught to feel shame and loathing for their parents. 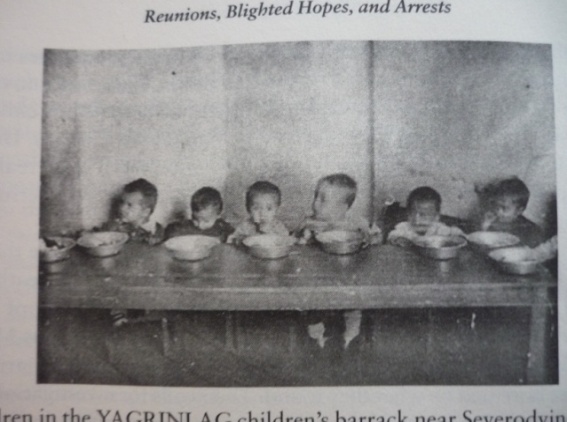 Despite the scrubbed faces of the children pictured, probably assembled for the Soviet version of Catherine (the “Great’s”) “Potemkin Village” presentations of the starved and miserable serfs of Czarist Russia to the Empress and her retinue, mortality as the years went by approached 95% among separated children.

The cause was that apparently no resources were made available to the program, forcing the barely clad, filthy and starving children out to forage for themselves. Abuse by the barely paid staff (where there was any) was horrendous.

The situation of “Anna”, love child of Lara and Dr. Zhivago in the novel and film, in which she was discovered in adulthood as a laundry worker, would have been exceptional.