CO2 is an excellent fire extinguisher. Meteors and asteroids are supposed to burn up in our atmosphere–unless it contains high levels of CO2. An example from our geologic past explained below.

The most recent period of the Earth’s history, the Cenozoic era, began 65 million years ago with a bang: a
meteorite impact that ended the rule of the dinosaurs, but disturbed only briefly the super-warm climate of
the times. However, for the past 50 million years, the Earth has been cooling and it is now becoming clear
that this long-term cooling trend may be  reversing in the last few decades (IPCC, 2001). In this chapter,
I outline the evidence for this view, which is becoming widely accepted by those who study the Earth’s
climate system and its past history.
Although geologists have been learning about the Earth’s history for hundreds of years, a real understanding
has developed merely in the last four decades through deep-sea drilling and analytical chemistry. Thousands
of cores have been extracted from the seabed, and analysed by tens of thousands of scientists in hundreds of
laboratories. They have increased our understanding of many aspects of the Earth’s history, but I intend to
focus on just two: the Earth’s surface temperature, and carbon dioxide (CO2) levels in the atmosphere.

Until 65 million years ago, when dinosaurs still roamed the Earth, the planet’s geography was somewhat
different from now in several respects. The Atlantic Ocean was much narrower to both the north and south,
Australia was still joined to Antarctica, and New Zealand was under the sea off the coast of Australia.
However, the Earth’s temperature was very different. This was a warmer planet by between 6°C and 10°C,
and CO2 levels were between two and eight times higher than pre-industrial values (Bice et al. 2006). It was
what scientists now call a ‘greenhouse world’. Life on Earth was severely challenged on that day 65 million
years ago when a meteorite 10 km wide hit the Yucatan Peninsula, leaving a 200 km crater and sending
many cubic kilometres of shattered debris and dust into the stratosphere. As a consequence, not only the
dinosaurs but around sixty percent of all species on Earth died out. There was undoubtedly a major impact on
the Earth’s climate for decades or even longer. Cooling effects from the dust of the explosion gave way to
warming as the dust settled out, and increased CO2 from the fires that followed.

About The Chicxulub Crater (left by the meteorite referred to above)

The Chicxulub crater on the Yucatan peninsula is believed to be the most likely site of the asteroid impact responsible for the demise of the dinosaurs. 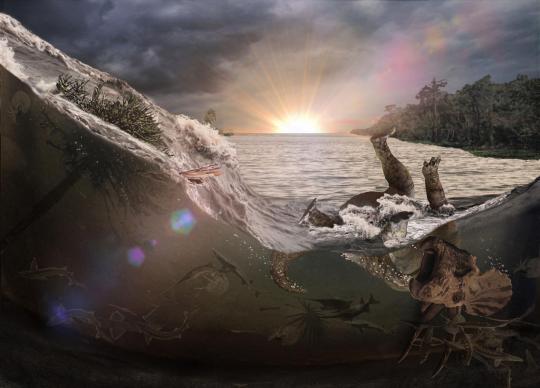 The crater measures between 180 and 240 kilometres across, indicating an impactor of colossal size, the biggest impact confirmed on Earth.

The Chicxulub crater represents the most recent major impact on the Earth, and despite its geologically young age, it is already an extremely well- hidden structure that has taken teams of geologists and geophysicists many years to unravel.

The crater was just recently discovered. In 1978, geophysicists Glen Penfield and Antonio Camargo worked for the Mexican state oil company Pemex, as part of an aerial magnetic survey of the Gulf of Mexico, just north of the Yucatan Peninsula. Their job was to use geophysical data to study possible locations to extract oil. During their investigation, they found a big symmetrical underground arc that measured around 70 kilometers.

But this wasn’t the first map Pemex had of that area. Another Pemex contractor, Robert Baltosser made similar discoveries earlier, but was forbid to publish them because of Pemex corporate policy. Consulting the maps made by Baltosser, Penfield found another arc on the peninsula itself. Comparing the two maps, he found that the two arcs formed a circle 180 km in diameter, with its central point near the town of Chicxulub , in the Yucatan. Based on this data, he was sure that the site was a spot of some cataclysmic event in geological history.

Although Pemex forbid them to publish certain data, Penfield and Camargo presented their findings in 1981 at a conference of the Society of Exploration Geophysicists (SEG). At that moment his report attracted little attention because although they had lots of geophysical data, they had no rock samples, or any other physical evidence of the collision.

Concomitantly, American physicist, Luis Walter Alvarez published a paper in which he theorized that the Earth was stuck by a foreign object around the Cretaceous–Paleogene boundary (K-T boundary). After data about the Chicxulub crater was gathered, it was linked to Alvarez’s theory, providing support for it.

Environmental and geological effects of the impact

It is believed that after the impact, some of the biggest tsunamis in Earth’s history were formed.

The emission of dust and particles could have covered the entire surface of the Earth for several years, possibly a decade, making life difficult for many terrestrial animals.

For some years after the impact, sunlight would have been prevented to reach the surface of the Earth, cooling it down abruptly.

Besides the cooling effect, plants wouldn’t have been able to develop, causing devastating effects for the entire food chain.

There are also speculations that the vaporized material might have blown away part of Earth’s atmosphere or that the impact would have resulted worldwide forest fires, but these speculations need to be challenged.

(Phys.org)—A team of scientists from the Naval Research Laboratory, Old Dominion University, and the University of Waterloo reports the first direct evidence that emissions of carbon dioxide (CO2) caused by human activity are propagating upward to the highest regions of the atmosphere. The observed CO2 increase is expected to gradually result in a cooler, more contracted upper atmosphere and a consequent reduction in the atmospheric drag experienced by satellites. The team published its findings in Nature Geoscience on November 11, 2012.

The team of Dr. John Emmert, Dr. Michael Stevens, and Dr. Douglas Drob from NRL’s Space Science Division; Dr. Peter Bernath from Old Dominion University; and Dr. Chris Boone from the University of Waterloo in Canada studied eight years of CO2 measurements made by the Atmospheric Chemistry Experiment (ACE), a scientific satellite mission funded primarily by the Canadian Space Agency. ACE determines vertical profiles of CO2 and many other atmospheric gases by measuring how the atmosphere absorbs sunlight at different wavelengths as the Sun rises and sets relative to the spacecraft.

CO2 occurs naturally throughout Earth’s atmosphere and is the primary radiative cooling agent in the energy balance of the mesosphere (~50-90 km altitude) and thermosphere (>90 km). The same properties of CO2 that cause it to trap heat in the troposphere (<15 km) make it an efficient cooler at higher altitudes. The difference is that at high altitudes, the density of CO2 is too thin to recapture the infrared radiation (heat) that it emits. “In the upper atmosphere,” explains Emmert, “thermal energy is transferred via collisions from other atmospheric constituents to CO2, which then emits the energy as heat that escapes to outer space.”

The enhanced cooling produced by the increasing CO2 should result in a more contracted thermosphere, where many satellites, including the International Space Station, operate. The contraction of the thermosphere will reduce atmospheric drag on satellites and may have adverse consequences for the already unstable orbital debris environment, because it will slow the rate at which debris ( asteroids and meteorites) burn up in the atmosphere.

It has been expected that anthropogenic CO2 increases are propagating upward throughout the entire atmosphere. Before the study of ACE data, CO2 trends had been measured only up to 35 km altitude, although indirect evidence from satellite drag studies indicates that the thermosphere is indeed slowly contracting. The scientists estimate that the concentration of carbon near 100 km altitude is increasing at a rate of 23.5 ± 6.3 parts per million (ppm) per decade, which is about 10 ppm/decade faster than predicted by upper atmospheric model simulations. In comparison, tropospheric CO2 concentrations are increasing at a rate of about 20 ppm/decade (the current concentration of CO2 near the ground is ~390 ppm). The authors speculate that the larger than expected upper atmospheric trend may be caused by changes in upper atmospheric circulation and mixing.