THE BOOKS WHICH FORETOLD THE AGE OF TRUMP?

‘We see the same stars, the sky is shared by all, the same
world surrounds us. What does it matter what wisdom a
person uses to seek for the truth?’

They came, the destroyers, from out of the desert. Anyone who saw them approaching would have feared them. For years, marauding bands of bearded, black-robed zealots, armed with little more than stones, iron bars and an iron sense of righteousness had been terrorising the east of the Roman Empire. They would terrorise it for years to come.

Their attacks were primitive, thuggish – and very, very effective. These men moved in packs, later in swarms of as many as 500 men, and when they descended utter destruction followed. Their targets were the temples and their attacks could be astonishingly swift. Great stone columns that had stood for centuries would collapse in an afternoon; statues that had stood for centuries had their their faces mutilated in a moment; temples that had seen the rise of the Roman empire would fall in a single day.

This was violent work but it was far from solemn. Men roared with laughter and jeered as they smashed the evil, idolatrous statues; the faithful chanted and sang as they tore down temples, stripped roofs and defaced tombs. Chants appeared, immortalising such glorious moments. “Those shameful things” sang pilgrims, proudly, the “demons and idols….our good saviour trampled down / all together ”. Zealotry rarely makes for good poetry.

To believers, the sound of an ancient marble statue of Aphrodite smashing was not the sound of vandalism, it was the sound of victory. The pious men conducting these attacks saw themselves not as thugs but as soldiers; warriors in a fight against the wicked, idolatrous demons, against all who worshipped them and, ultimately, against Satan himself.

Nonsense, said educated observers as they looked in horror. These zealots were not noble warriors. They were illiterate idiots who would happily destroy the work of some the greatest artists of the empire then consider that they had done a great deed. They pretended to live lives of self-denying asceticism but they were more alcoholic than ascetic, boorish thugs who got drunk, then bored everyone with their tedious chanting, and then the next day would “hide these excesses under an artificially contrived pallor”: a hangover, masquerading as holiness. The sound of these statues smashing was not, argued educated non-believers, the sound of a moral victory. It was nothing less than the sound of the collapse of civilisation itself.

In this atmosphere of religious zealotry, Palmyra was an obvious target. The entire city was a monumental rebuke to monotheism. Walk towards it, past the palms that had given it its name and long before you even arrived in the city you could see its famous tower tombs. Go through the great city gate and your attention would be drawn to a competing clamour of gods, to the temples of the Semitic Bel, Baalshamin and even, far from home here, to the temple of the goddess Athena, or, as she was known in these parts, with the usual elasticity of Greco-Roman gods, Athena-Allat.

Not only did the inhabitants of Palmyra worship these demons, they actually seemed to enjoy doing so. Unrepentant in their wickedness, would celebrate their gods by dressing up, feasting, drinking and singing. The chief priest of Bel was known by the less than sober-sounding title of the “Master of Dining”. Worship in this town was communal, convivial and a lot of fun. Naturally, the zealots loathed it. Banqueting in mixed company was sinful; fine clothes were wicked; makeup was demonic; wine led to lustfulness and music, they declared, was from Satan himself.

However these evils paled in comparison to Palmyra’s greatest sin: the temples and the demonic statues within them. Enter the temple of Athena and it would have taken your eyes a moment, after the brightness of a Syrian sun, to adjust to the cool gloom within. As they did, you might have noticed that the air was heavy with the tang of incense or perhaps that what little light there was came from the glow of some of the hundreds of lamps left by the faithful. Look up after a  pause and then, in their dim flickering light, you would have seen her: the demon Athena herself.

Her handsome, haughty profile might be far from home but it was instantly recognisable, with her straight Grecian nose, her translucent marble skin and that plump, slightly sulky mouth. Her size itself, far taller than any man might also have impressed, though perhaps even more impressive than her scale was the scale of the imperial infrastructure that had brought her here. This statue was a fine copy of a statue that stood in the Athenian Acropolis, over thousand miles away, that had been made in a workshop hundreds of miles away, then transported here at enormous difficulty and great expense to create this little island of Greco-Roman culture by the sands of the Syrian desert.

Did they notice this, the destroyers, as they entered? Were they, even fleetingly, impressed by the sophistication of an empire that could quarry, sculpt then transport such marble over such vast distances, with so little diminution in the standard of the workmanship?  Did they, even for a moment, admire the skill that could make a kissably soft looking mouth out of hard marble? Did they, for even a second, wonder at her beauty?

It seems not. Because when the men, the destroyers, entered the temple they took their weapon and smashed the back of Athena’s head with a single blow so hard that it decapitated her. Her head fell to the floor, smashing off that handsome haughty nose, crushing her once-smooth cheeks and her mouth. Her eyes, untouched, looked out over a now-mutilated face.

Mere decapitation however wasn’t enough. More blows fell on Athena, scalping her, striking her helmet from her head, smashing it into two pieces. Further blows attacked her body. The mutilated statue fell from its pedestal whereupon her arms and shoulders were, for good measure, chopped off. Her body, for added humiliation, was left face-down in the dirt. Her nearby altar was sliced off just above its base.

Only then does it seem that these men – these Christians – satisfied that their work with her was done. In their filthy black robes they melted out once again into the desert. Behind them the temple, now exorcised of its “satanic” demons, fell silent. The votive lamps, no longer tended, went out. On the floor, the mutilated head of Athena started to slowly become covered by the sands of the Syrian desert.

The triumph of Christianity had begun. 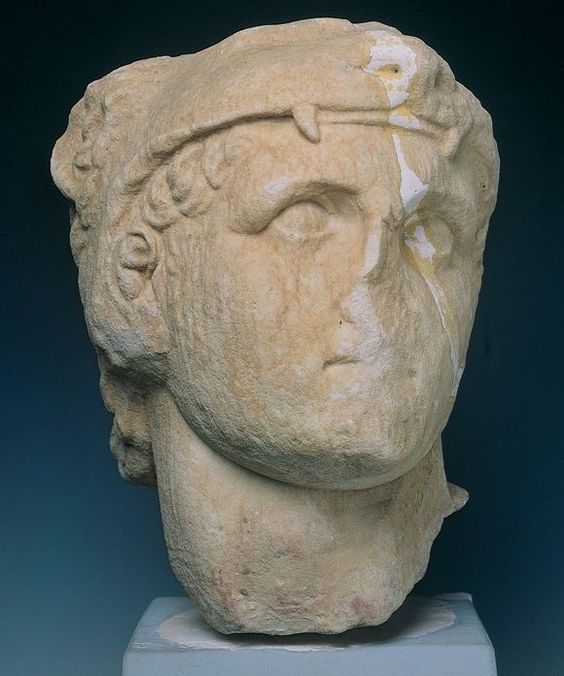 As Athena looks today after Christian attack (above), as it originally looked (a reconstruction) in the peaceful Roman city of Palmyra (below) 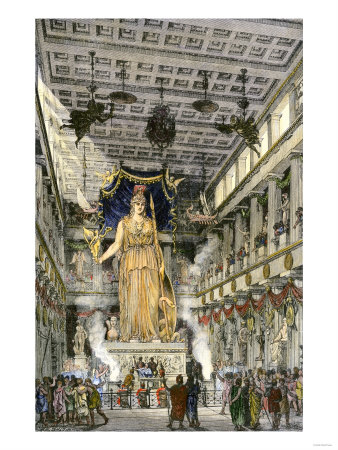 The above is an excerpt from the new book: THE DARKENING AGE. (The Christian Destruction of the Classical World)    author profiled below

(Catherine Nixey studied classics at Cambridge. She taught Latin for a number of years but now works as a journalist on the arts desk at The  London Times. Her interest in the early Christians was piqued by her background: she is the daughter of a former monk and nun and was brought up as a Catholic. This is her first book.)