Are forces unleashed in today’s U.S. (with help from Putin’s Russia) behind attacks on Jews and Blacks related to the origin story related below? How does this relate to Trump and his collaborators today?
The waves of anti-Semitism emanating from Hitler and the Nazi Party in Germany and the prospects of American involvement in the war in Europe convinced the Christian Americans to tone down their anti-Semitic rhetoric by the early 1940s. As Vance Muse’s co-worker and wife, Maria, confessed in 1943, “Christian Americans can’t afford to be anti-Semitic outwardly, but we know where we stand on the Jews, all right.” 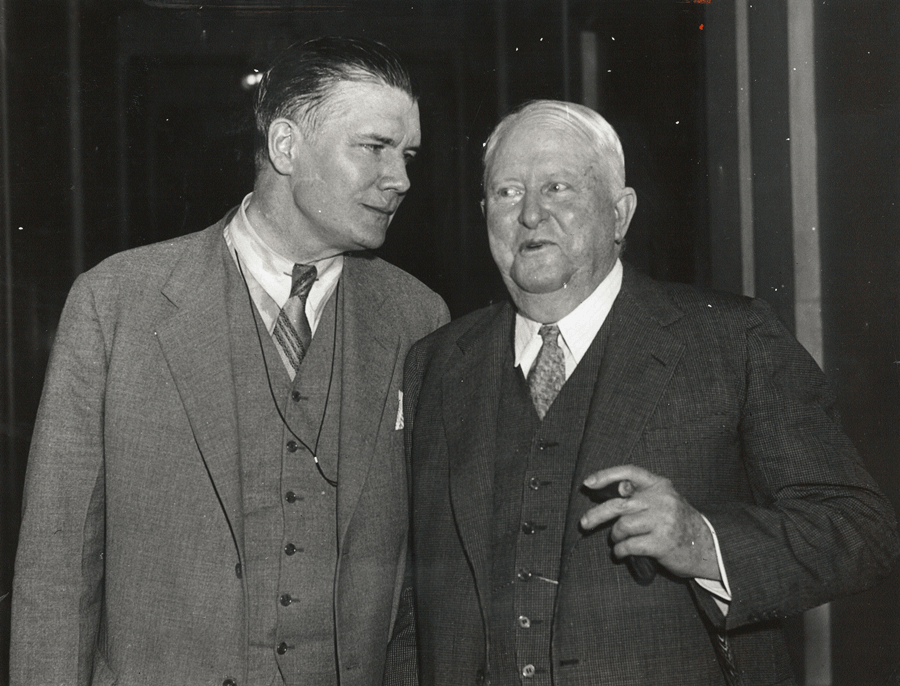 The Origins of Right-to-Work. Vance Muse, Anti-Semitism, and the Maintenance of Jim Crow Labor Relations

Michael Pierce, associate professor at University of Arkansas, is working on a book project examining the rise and fall of New Deal-style liberalism in Arkansas. He is the author of Striking with the Ballot: Ohio Labor and the Populist Party

View all posts by Michael Pierce »

As Kentucky legislators pass a measure outlawing the union shop and Missouri’s General Assembly contemplates doing the same, it is worth remembering that so-called Right-to-Work laws originated as means to maintain Jim Crow labor relations and to beat back what was seen as a Jewish cabal to foment a revolution. No one was more important in placing Right-to-Work on the conservatives’ political agenda than Vance Muse of the Christian American Association, a larger-than-life Texan whose own grandson described him as “a white supremacist, an anti-Semite, and a Communist-baiter, a man who beat on labor unions not on behalf of working people, as he said, but because he was paid to do so.”

The idea for Right-to-Work laws did not originate with Muse. Rather it came from Dallas Morning News editorial writer William Ruggles, who on Labor Day 1941 called for the passage of a United States Constitution amendment prohibiting the closed or union shop. Muse visited Ruggles soon thereafter and secured the writer’s blessing for the Christian American Association’s campaign to outlaw contracts that required employees to belong to unions. Ruggles even suggested to Muse the name for such legislation—Right-to-Work.

They call me anti-Jew and anti-nigger. Listen we like the nigger—in his place … Our [Right-to-Work] amendment helps the nigger; it does not discriminate against him. Good niggers, not those Communist niggers. Jews? Why some of my best friends are Jews. Good Jews.Muse had long made a lucrative living lobbying throughout the South on behalf of conservative and corporate interests or, in the words of one of his critics, “playing rich industrialists as suckers.” Over the course of his career, he fought women’s suffrage, worked to defeat the constitutional amendment prohibiting child labor, lobbied for high tariffs, and sought to repeal the eight-hour day law for railroaders. He was also active in the Committee for the Americanization of the Supreme Court, which targeted Justice Felix Frankfurter, a Vienna-born Jewish man, for his votes in labor cases.

But Muse first attracted national attention through his work with Texas lumberman John Henry Kirby in the Southern Committee to Uphold the Constitution, which sought to deny Roosevelt’s re-nomination in 1936 on grounds that the New Deal threatened the South’s racial order. Despite its name, the Southern Committee to Uphold the Constitution received funding from prominent northern anti-New Deal industrialists and financiers including John Jacob Raskob, Alfred P. Sloan, and brothers Lammot, Irénée, and Pierre du Pont. Among Muse’s activities on behalf of the Southern Committee was the distribution of what Time called “cheap pamphlets containing blurred photographs of the Roosevelts consorting with Negroes” accompanied by “blatant text proclaiming them ardent Negrophiles.” Muse later defended the action and the use of its most provocative photograph: “I am a Southerner and for white supremacy . . . . It was a picture of Mrs. Roosevelt going to some nigger meeting with two escorts, niggers, on each arm.”

In 1936, on the heels of the Southern Committee’s failure to deny Roosevelt’s nomination, Muse incorporated the Christian American Association to continue the fight against the New Deal, offering up a toxic mix of anti-Semitism, racism, anti-Communism, and anti-unionism. The Christian Americans considered the New Deal to be part of the broader assault of “Jewish Marxism” upon Christian free enterprise. The organization’s titular head, Lewis Valentine Ulrey, explained that after their success in Russia the “Talmudists” had determined to conquer the rest of the world and that “by 1935 they had such open success with the New Deal in the United States, that they decided to openly restore the Sanhedrin,” that is, both the council of Jewish leaders who oversaw a community and the Jewish elders who, according to the Bible, plotted to kill Christ. This “modern Jewish Sanhedrin”—which included people like Justice Frankfurter and NAACP board member Rabbi Stephen Wise—served as the guiding force of the Roosevelt Administration and the New Deal state. Vance Muse voiced the same anti-Semitic ideas in much simpler terms: “That crazy man in the White House will Sovietize America with the federal hand-outs of the Bum Deal—sorry, New Deal. Or is it the Jew Deal?”

By the early 1940s, Muse and the Christian Americans, like many southern conservatives, focused much of their wrath on the labor movement, especially the unions associated with the Congress of Industrial Organizations. The Christian Americans solicited wealthy southern planters and industrialists for funds to help break the “strangle hold radical labor has on our government” through the enactment of anti-union laws. Muse and his allies continued to claim that Marxist Jews were pulling the national government’s strings, but the membership of this cabal shifted from the likes of Wise and Frankfurter to CIO leaders like Lee Pressman and Sidney Hillman. The Christian Americans, like other southern conservatives, insisted that the CIO—which had become shorthand for Jewish Marxist unions—was sending organizers to the rural South to inflame the contented but gullible African-American population as the first step in a plot to Sovietize the nation.

The waves of anti-Semitism emanating from Hitler and the Nazi Party in Germany and the prospects of American involvement in the war in Europe convinced the Christian Americans to tone down their anti-Semitic rhetoric by the early 1940s. As Vance Muse’s co-worker and wife, Maria, confessed in 1943, “Christian Americans can’t afford to be anti-Semitic outwardly, but we know where we stand on the Jews, all right.”

Muse and the Christian Americans initially had little luck selling their Right-to-Work amendment but did have success peddling a pre-packaged anti-strike law to planters and industrialists first in Texas and then later in Mississippi and Arkansas. This law made strikers, but not strikebreakers or management, criminally libel for any violence that occurred on the picket line. For a fee, Muse and his organization would lobby legislators and mobilize public support through newspaper advertisements, direct mail campaigns, and a speakers’ bureau. In Arkansas, Muse and the Christian Americans portrayed the anti-strike measure as a means to allow “peace officers to quell disturbances and keep the color line drawn in our social affairs” and promised that it would “protect the Southern Negro from communistic propaganda and influences.”

The Arkansas Farm Bureau Federation and allied industrialists were so pleased with the Christian American Association’s success in passing the anti-strike measure that they agreed to underwrite a campaign in 1944 to secure a Right-to-Work amendment for the Arkansas constitution. This placed Arkansas alongside Florida and California as the first states where voters could cast ballots for Right-to-Work laws. While Muse and the Christian Americans consulted with the campaigns in California and Florida, they led the one in Arkansas.

During the Arkansas campaign, the Christian Americans insisted that right-to-work was essential for the maintenance of the color line in labor relations. One piece of literature warned that if the amendment failed “white women and white men will be forced into organizations with black African apes . . . whom they will have to call ‘brother’ or lose their jobs.” Similarly, the Arkansas Farm Bureau Federation justified its support of Right-to-Work by citing organized labor’s threat to Jim Crow. It accused the CIO of “trying to pit tenant against landlord and black against white.”

In November 1944, Arkansas and Florida became the first states to enact Right-to-Work laws (California voters rejected the measure). In both states, few blacks could cast free ballots, election fraud was rampant, and political power was concentrated in the hands of an elite. Right-to-Work laws sought to make it stay that way, to deprive the least powerful of a voice, and to make sure that workers remained divided along racial lines. The current push for Right-to-Work in Kentucky and Missouri (along with the fueling of nativism) does something similar—it is an attempt to persuade white working people that unions and racialized others are more responsible for their plight than the choices made by capital.