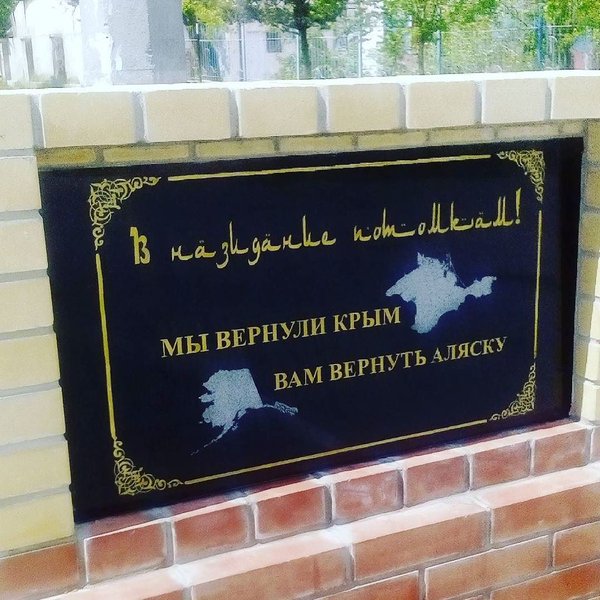 RUSSIANS have demanded the return of Alaska from the US in a fiery new memorial.Images of the stone engraving in the Crimean town of Yevpatoria have emergedin the region recently annexed from the Ukraine by Vladimir Putin.Russia has flexed its muscles in Crimea since seizing the region from neighbour Ukraine in 2014.

Carrying an image of Crimea and Alaska, an inscription on the marble slab reads: “We have returned Crimea, you are to return Alaska!”

Has Vladimir Putin set his sights on ALASKA after war-mongering Russians demanded the US state is returned to Moscow’s rule?

United States bought the icy state from Russia for just £6million back in 1876, or $7.2 million dollars. Though an enormous sum just after the Civil War, Russians in 2016 are quick to point out that our government paid with a “rubber check”, since the Senate of the day refused to back the check with actual money. This is the basis of the claim by many that the U.S. acquired Alaska through fraud.

Years passed until the Russian Ambassador summoned a number of Senators, including Daniel Webster, to a sumptuous dinner during which he provided Senators present with a “gift” of $10,000 (the equivalent of millions today) each. Soon afterward, the Senate backed the check mentioned above with actual funds.

BY DANNY COLLINS, staff writer for the London SUN newspaper

It is just the latest in a series of coded warnings from newly-resurgent Moscow that it is eyeing up its former territory.

Russia first established colonies in North America back in 1733.

Eastern pioneers first established settlements in Alaska, Canada, and then later in California.

Voyages were first made across the narrows of the Bering Strait in the hunt for valuable beaver pelts.

By the mid 19th-century, intrepid explorers had established Fort Ross in California.

But Moscow was forced to abandon its American adventure by 1867, citing the high cost of war with Britain–at the time considering annexing (by force) Russian territory adjoining its own North American lands, now known as Canada.

The Russian and US mainland are separated by barely 55 miles across the Bering Strait.

Each country possesses one of the Diomede Islands, which are only two miles apart.

It means two of the world’s superpowers are barely a few thousand metres (yards, in English measure) apart at their closest point.

The USA’s largest state was later found to contain reserves of natural gas and oil.That fact has not gone unnoticed in Russia, which lies only 55 miles away from Alaska across the Bering Strait.

.On one of Vladimir Putin’s carefully monitored “call-in” programs, a caller asked whether he would like to see his country seize America’s 49th state. Yet Vlad brushed off the question, dismissing the region as a cold outpost of no interest to Moscow.

He replied: “My dear caller, why do you need Alaska?”

“Although we sold Alaska to the United States for a song, we are the northern country. “

“Seventy percent of our territory today is located in regions of the North and Far North.”

“Alaska is not in the Southern hemisphere. It is also cold there.”

“Let’s not be hot-tempered.”

Lead singer of the band “ Lyube”,  Nikolai Rastorguyev had sung about the need for Russia to reclaim its territories in Alaska. V. Putin is a fan of this musical group. “Mixed signals” are hallmarks of Putin’s style. Below is an example:

“Do Not Fool with Us, America!The Tsars were wrong! Russia and Alaska are two banks of the same river!”

“Give back our dear land, dear Alaska, give it back to us!”

“We should have reclaimed Alaska a long time ago!”

Only last year an inflammatory TV documentary was aired with the name “When Will Alaska become Ours?” No doubt the script was a production of the Putin homeland propaganda machine. Nothing gets on Russian TV without approval.