Don your Sherlock Holmes hat for this unsolved mystery: A MADMAN’S FINAL REVENGE, or how New York City was saved by a Uboat mutiny.

THE COMING RACE  (a Victorian novel by Edward Bulwer-Lytton) and its attendant barmy mysticism would have sunk into obscurity if it hadn’t been for the First World War. At the end of the war, Germany was plunged into violent anarchy and a host of extremist politicians and cult leaders stepped into the breach and battled for power. Chief of these was the occult Thule Society – and its inner sect, the Vril Society. 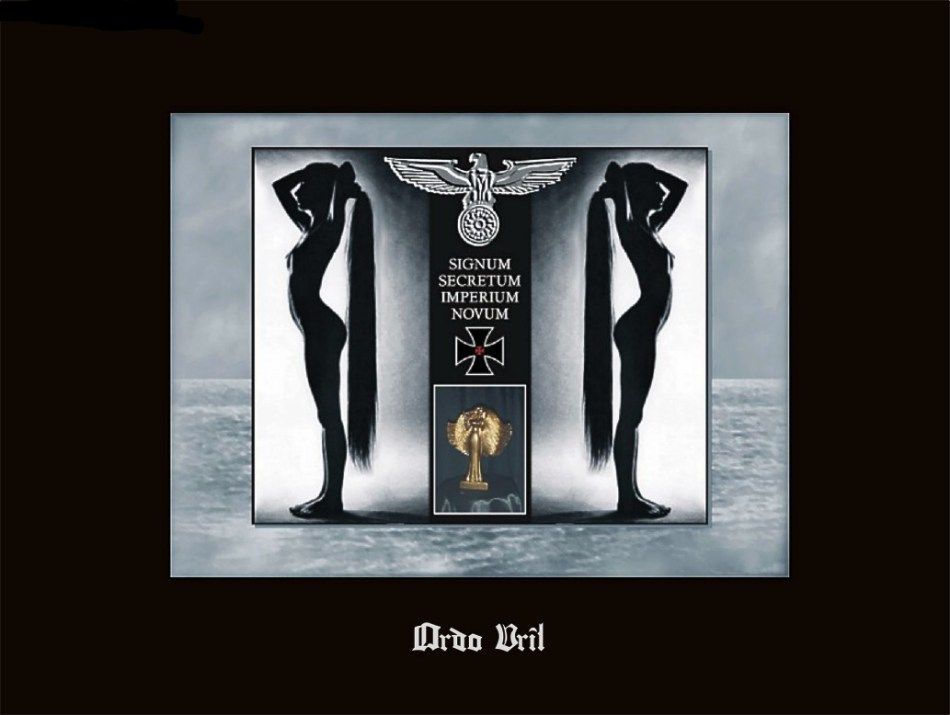 “But the darkest side of the Vril was their propensity for sacrificing young children,” says Michael Fitzgerald, author of Stormtroopers of Satan. “They would stab them in the chest and cut their throats.

“At the height of their power in 1920s Munich, hundreds of children disappeared. Many are presumed to have been killed by the cult to summon up Vril energy. This may seem like an outlandish claim but when you consider what these people went on to do in the Third Reich, it seems almost tame.”

Central to the Vril Society was the search for a German Messiah who would lead the Aryan’s to world domination and exterminate all other races – especially the Jews. And his rise was predicted by a spirit calling itself the “Beast of the Book of Revelation.”

In a séance attended by the cult followers Alfred Rosenberg and Dietrich Eckart, the Beast is said to have proclaimed that a man named “Hitler” would seize the “Spear of Destiny” and lead the Aryans to power.

And within a few weeks, a fiery young man of shabby appearance began attending Thule Society meetings. His name was Adolf Hitler. Below may be his final claim to infamy.

On 10 July 1945, a German submarine, U-530, a Type IXC/40 boat, appeared in the Argentine port of Plata del Mar and surrendered to the Armada de la República Argentina, an officially belligerent but Nazi-sympathetic navy, more than two months after the formal surrender of Nazi Germany and the direct order of Admiral Karl Dönitz to all u-boats at sea to surface and immediately surrender to the nearest Allied authority.

Not only were the actions of U-530’s commander a direct contravention of the surrender terms formalized on 8 May 1945 between the Allied Powers and the German government and military, but the circumstances of the last voyage of the U-530 were also very mysterious, and remain so to this day. When taken over by the Argentines, U-530 was completely devoid of ships papers — the logbook, manifest, written orders, dockyard papers, etc. The personal identity documents of the crew, their soldbuchs and ID disks, were also missing. There was virtually nothing on board to account for the movements and mission of the vessel since leaving Horten Naval Base in Norway shortly before the war ended except for the personal testimony of the commander and his crew, and they weren’t very talkative.

When asked to explain why he had not followed Admiral Dönitz’s surrender directives, Oberleutnant zur See Otto Wermuth, would only say he was under orders “from Berlin”, which could only mean direct orders from Hitler himself, since in the German submarine service in WWII there was no one with higher authority than Dönitz except Hitler as commander-in-chief of the Wehrmacht.

The condition of the submarine itself was highly suspicious. The casing (the outer superstructure built over the pressure hull) and the conning tower were extremely rusty, and much of the paint was missing, having been either scraped or burned off. Her 10.5cm SK C/32 deck gun and mount were missing along with its ammunition, apparently having been jettisoned at sea. Also, there were no torpedoes or torpedo racks in her torpedo spaces fore and aft. No explanation of the vessel’s condition was offered by Wermuth or his subordinates.

After the sub and its crew were turned over to the Americans, the crew were further interrogated by ONI officers, but nothing more was learned (or more precisely, nothing more was learned that was published.) Wermuth and his men were eventually released and repatriated to Germany, because the only viable war crime charge that could be preferred against Wermuth or the crew, the postwar sinking of the Brazilian cruiser Bahia on 4 July 1945, was shown to be false. The submarine itself was sunk as a torpedo training target by USS Toro on 28 November 1947.

There are many theories offered to explain the voyage of the U-530. The most outlandish ones suggest that the sub was transporting high-ranking Nazi military and political figures, perhaps even Adolf Hitler and Eva Braun themselves, to a secret landing somewhere on the coast of Argentina or Uruguay. These speculations account for the large empty spaces fore and aft (i.e. accommodation for passengers) and her surrender to Argentina but do not account for the delay. U-530 was a schnorkel-equipped vessel and could have sustained 6 knots submerged all the way from Norway, about 48 days. U-530 was at sea 63 days after the surrender.

Another theory is both more plausible and more sinister. There is reason to believe that after the firebombing of Dresden (‎13–15 February 1945) Hitler ordered a revenge attack on the United States in the form of a nerve gas assault on New York City by submarine. By 1945 Germany had invented and stockpiled at least two nerve agents able to be deployed by explosive ordnance, Sarin and Tabun, which could have been made into shells capable of being fired by U-530’s 10.5cm deck gun. Surfacing at night in the East River would have made a catastrophic nerve gas bombardment of Manhatten and Brooklyn possible, but almost certainly suicidal. Hitler was talked out of this gas attack by his most trusted underlings, including Albert Speer, as self-defeating because it would give the Americans a justification of using its chemical warfare agents on Germany or so says the tale. However, it may be that Hitler resurrected his submarine-launched gas attack plan as a final gesture of defiance.

The gas attack on NYC theory explains much of the known facts about U-530’s last patrol. First, there is the absence of torpedoes and torpedo racks. Both the forward and after torpedo rooms had watertight (and therefore airtight) interior hatches and torpedo loading hatches leading to the weather deck. Without torpedos or torpedo racks these spaces could be used as chemical ammunitions handling rooms for the deck mount that would not endanger the rest of the crew spaces should there be an accident. 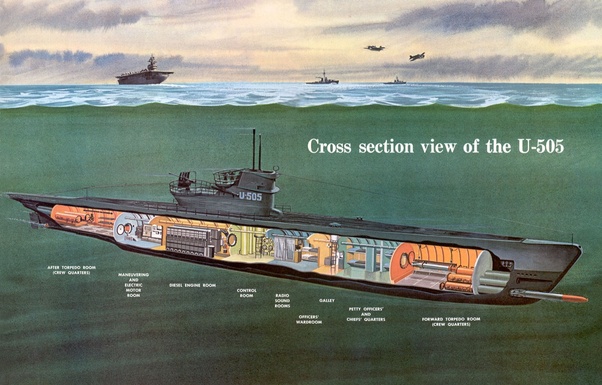 Secondly, it explains the absence of ship and crew documents. Wermuth and his men would rightly fear prosecution for war crimes if their participation in a gas attack scheme were ever exposed.

Thirdly, the poor physical condition of the boat can be explained as a consequence of a mutiny aboard U-530. Consider the following scenario: After putting to sea under sealed orders and having been supplied with a huge load of “special” shells for the deck gun in lieu of torpedoes, the crew discovers the true nature of their mission. Not wanting to be hanged by the Allies or to give the Americans an excuse to attack Germany in kind they hatch a mutiny plot. While running on the surface the lookouts seize Oblt.z.S. Wermuth or his first officer. They also gain control of the conning tower and foredeck hatches to prevent U-530 submerging to drown the mutineers. After gaining at least partial control of the boat the mutinous crewmen proceed to foil the gas attack plot by detaching the deck mount and throwing it overboard. Further suppose, that while laboring to jettison the deck gun or fighting with loyal crew members the mutineers somehow set fire to the weather deck, which burns off the much of the paint. This would explain the severely rusted appearance of U-530’supperworks.

With his deck gun jettisoned, Wermuth has no means to use the deadly shells stored in the torpedos spaces. Consequently, he agrees to the mutineers’ demands: He must take the u-boat to some deserted stretch of deep water where the nerve gas shells can be safely thrown overboard without significant risk of encountering a witness. Next, he must agree to destroy all documents that could be used to link the ship and its crew to the gas attack plot.

To dispose of their deadly cargo there could hardly be a better spot than the Scotia Sea. 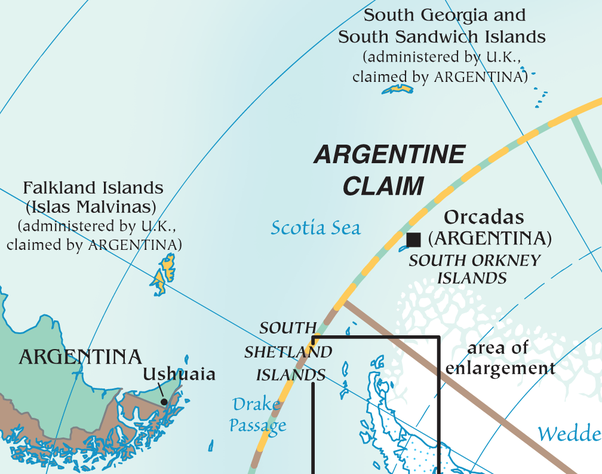 In June and July 1945 the Scotia Sea was among the most deserted waters on the planet. June and July are winter months in the Southern Hemisphere, and in the 1940s much of the ship traffic in the Scotia Sea consisted of fishing and whaling vessels. In winter the whales are gone, and the sea is generally too rough for fishing assuming there is much fish to catch. Furthermore, the waters there are very deep — 19,000 feet and more. In other words, perfect for the mutineers’ purpose. This putative voyage to the Scotia Sea accounts fairly well for the 63 days delay in surrendering.

The lesson here is how mad rulers take revenge on those driving them from power. Should we be concerned about this in the United States of 2019?

Note also the blame despots place upon their most loyal followers when the end of their regime looms. Here is an example from Hitler: “The German people has not fought heroically, it deserves to perish. It is not I who have lost the war, but the German people”.’