How about a new approach to gaining control of the lethal weapons trade. “Swords to Plowshares” moving on to “AR15s to guitars”.  Or, instead of tracer bullets sprayed on concert goers (remember Las Vegas) recycled weapons on stage backing up the soloists. 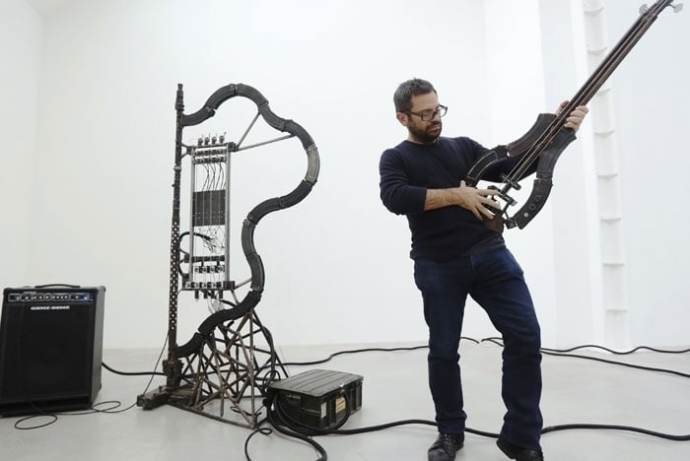 Pedro Reyes with guitar and harp built of gun parts.

A new use for the 700+ guns arriving in Mexico daily (via the drug trade return trips) from the U.S. Finally, paraphrasing the NRA mantra:”Guns don’t kill people”, etc., these guns actually don’t kill–(unless you are a music critic).

Pedro’s “raw material” for this project involved some 6700 seized guns, about 10 days worth of guns arriving in Mexico–that authorities know about–.  What about the Rumsfeld quote re: “known unknowns”?

(click on the following links for various sound adventures)

Supposing that we in the U.S. managed to walk back from our suicidal gun worship, what kind of music we could make with the toxic residue before it found its way into smelting furnaces to make, say, new infrastructure for American cities.